Sangeetha Surabhi-2022 awarded to A. Kanyakumari

Sangeetha Surabhi for the year 2022 awarded to Kumari A.Kanyakumari

Nadasurabhi is greatly honoured to award the title of Sangeetha Surabhi to Vidushi A. Kanyakumari. Vidushi Kanyakumari is one of the greatest violinists on the firmament of carnatic music. She has won the prestigious awards of Sangita Kalanidhi and Padmasri. While Smt. Harini Raghavan read the citation on the recipient, Sri. Ananthakrishna Sharma spoke on the life-long contribution of A.Kanyakumari to the cause of Carnatic Music.

Very few artists in the field of carnatic percussion have contributed as much as veteran morsing vidwan Dr.L. Bhimachar. Nadasurabhi took pride in awarding the Sangeetha Surabhi title to Dr.L.Bhimachar. In a glittering ceremony on the morning of 3rd November 2019, Dr.Bhimachar accepted the award. The award consists of a citation and a purse. Smt. Harini Raghavan read the citation in chaste kannada tracing the life and achievements of Dr.Bhimachar. Dr.V.Krishna who is himself a leading mridangam vidwan, explained the technical nuances of the instrument, now internationally known as the Carnatic Morsing and the contribution of Dr.Bhimachar in raising the status of the instrument on the concert stage by his unique way of playing it. Dr.Bhimachar thanked Nadasurabhi for the honour.

Dr.Bhimachar (89 years) after the felicitation, accompanied Sri. T.V.Sankaranarayanan's vocal concert, on his morsing and enthralled the stunned audience by his virtuosity. 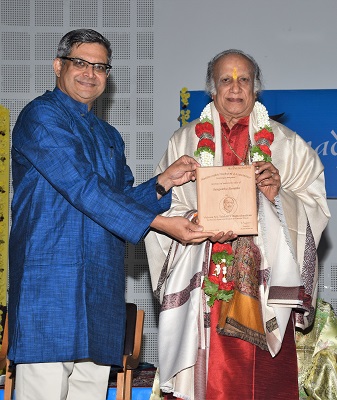 A very senior artist who has enriched the Carnatic music field for over five decades Vidwan Trichur V Ramachandran was the recipient of the award and title of Sangeetha Surabhi for the year 2018. The award was presented on 4th November 2018, in a majestic function in the presence of several senior musicians, students, admirers of Sri.TVR  and music lovers. General Secretary of Nadasurabhi in her citation pointed out the contribution of Sri. TVR to classical music and the unique style of rendering kritis based on the tradition of his illustrious guru Sri. G.N.Balasubramanian. The chief guest for the occasion, Vidushi Neela Ramgopal, in her speech emphasised the ease and flow of Sri. TVR's music and that he is a true torch bearer of the GNB baani. In his crisp acceptance speech Sri.Ramachandran conveyed his gratitude to his gurus and other mentors and dedicated the award to their blessing. The award ceremony was followed by a scintillating music concert by Sri.TVR which was a balanced presentation in all aspects of our great music form.