Legendary carnatic musician Dr.T.V.Gopalakrishnan was the recipient of the award and title of Sangeetha Surabhi for the year 2016. The award was presented on 6th November 2016, in a colourful ceremony in the presence of several senior musicians, students, admirers of Dr.TVG  and music lovers. General Secretary of nadasurabhi in her citation pointed out the breadth and depth of Dr.TVG's contribution to music as a mridangam maestro, vocalist, composer, guru and a specialist in the various genres of music , Carnatic, Hindustani, western, jazz, etc., Prof. Mysore V Subramanya in his felicitation speech, narrated the immense contribution of Sri.TVG for over six decades to the field of carnatic music. In his acceptance speech Dr.Gopalakrishnan ran through the initial years of his career and how, by his single minded devotion to music, he conquered these early obstacles and established himself as one of the greatest carnatic musicians. He also paid glowing tributes to his guru Sri.Chembai Vaidyanatha Bhagavathar. The award ceremony was followed by a chaste classical music concert by Dr.TVG and his team.

The Ninth Sangeetha Surabhi award was presented to Carnatic Music maestro Smt.Neela Ramgopal on 8th November 2015, in a colourful ceremony.

The senior most Carnatic vocalist from Bangalore Smt.Neela Ramgopal was bestowed with the title of Sangeetha Surabhi for the year 2015 in a grand function on 8th November 2015. Dr.Raghavendra, Ananya, presented the felicitation speech when he recalled the enormous contribution of Smt. Neela Ramgopal to the cause of Carnatic Music. Sri. Krishna Prasad, Hon.Secretary of Sree Rama Lalitha Kala Mandira released the biography of Smt. Neela Ramgopal written by Smt.Harini Raghavan, General Secretary, Nadasurabhi. Smt.Neela Ramgopal, in her acceptance speech, emphasised the need for support from various quarters, especially the family to be successful in a musical career. Also, she gave the message to young students that very hard work by continuous practice alone can help in achieving greatness in Indian classical music..

The eighth Sangeetha Surabhi award was presented to Carnatic Music maestro Dr. R.Vedavalli on 16th November 2014, in a colourful ceremony. 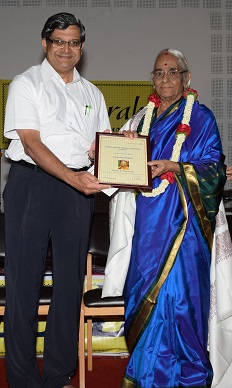 One of the greatest musicians and musicologists of our time, Dr.R.Vedavalli was bestowed with the title of Sangeetha Surabhi for the year 2014 in a grand function on 16th November 2014. Sri. N.S.Krishnamurthy, Director of AIR, Bangalore (Retd.) presented the felicitation speech where he recounted the immense contribution of Dr.Vedavalli to the cause of Carnatic Music. Smt.Neela Ramgopal, a close friend and fellow musician from Bangalore spoke a few words about Dr.Vedavalli, with affection. In her acceptance speech, Dr.Vedavalli expressed her thanks with great humility and dignity.